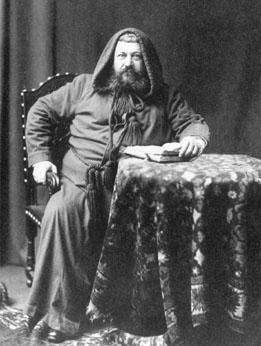 While digging into the Hayden archives, we stumbled upon this famous portrait of HH Richardson wearing a robe in his studio.  The image has been both a source of humor and inspiration for us these past few months.  We couldn’t help but wonder the story behind the photo.  We’ve determined that the architect used the robe to mystify the architect/client relationship.

According to lore, Richardson’s clients would make the trek from Boston to his Brookline studio to meet with him.  When they arrived, Richardson’s assistant would sound a gong and the architect would appear from the back wearing his monk’s getup.  In her book H.H. Richardson: the Architect, His Peers, and Their Era, Maureen Meister claims that Richardson wore the robes (and regularly disseminated the portrait to his potential clients) to reinforce his medieval and gothic design roots.

Richardson was prolific and successful early in his life, unlike the typical trajectory of an architect.  Although unusual, one must assume that this unique marketing tactic actually worked.  To Richardson, the architectural experience extended beyond that of buildings: He wanted your experience to begin when he entered the room.

Stuff-We-Find-in-Historic-Buildings #2: On Preservation and Pornography at the Hayden Building

This is the second in an occasional series that chronicles HBI’s growing collection of found items in the historic buildings where we work. We launched this series in February with a focus on the Roxbury Action Program’s years at the historic Alvah Kittredge House. This post looks at Chinatown’s Hayden Building.