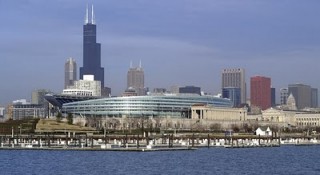 It has been called a “flying-saucer,” a “fish bowl,” a “fat man in a skinny man’s shorts,” and even the “ugliest building in the city.” Chicago’s Soldier Field addition was completed several years ago and the controversy surrounding its design draws attention to the same obstacles that confront today’s historically-significant buildings: Outdated preservation standards.
END_OF_DOCUMENT_TOKEN_TO_BE_REPLACED 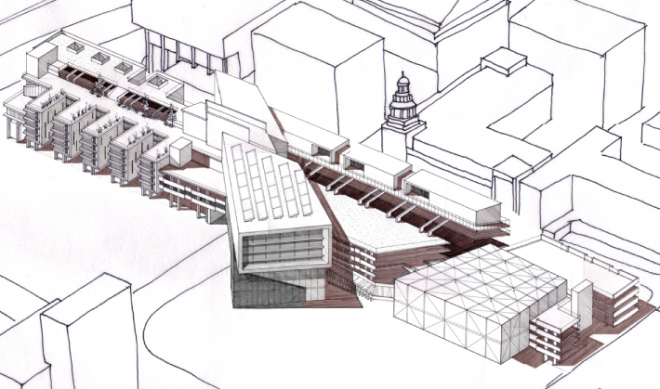 Can preservation be transformative? This was the central question in Chris Novelli’s master’s thesis at the Boston Architectural College. With CUBE serving as Chris’ thesis advisor, he set out to examine the possibilities of existing buildings, infrastructure, and landscapes if relieved of the curated formal constraints imposed under the U.S. Department of Interior Standards for Preservation. He selected Paul Rudolph’s heroic parking garage in New Haven, Connecticut as a fitting laboratory for his experiments.
END_OF_DOCUMENT_TOKEN_TO_BE_REPLACED 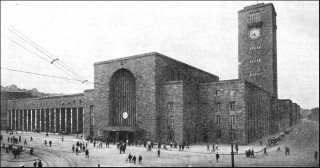 In his October 3rd New York Times column, architecture critic Nicolai Ouroussoff, writes about the plan by Ingenhoven Architects to transform the early century rail station in Stuttgart, Germany designed by Paul Bonatz. He calls the new design: “a callous disregard for architectural history. Its construction would require the partial destruction of one of the city’s most recognizable landmarks…” His main critique focuses on: “the preservation gesture of facadism — a favorite tactic of bureaucrats and developers in which a few architectural elements are preserved while the rest of a structure is bulldozed… [the] architecture is reduced to a picture postcard — an empty, superficial veneer… stripping it of the function that gave it meaning.” He goes onto say that if such facadist preservation persist: “it will lead to a cheapened, oversimplified view of history, one that suppresses the conflicts and contradictions that make cities vital.”
END_OF_DOCUMENT_TOKEN_TO_BE_REPLACED

Is modernism inaccessible to the general public?

In a recent article Marty Hylton, assistant professor at the University of Florida, broaches this subject. Mr. Hylton hypothesizes the lack of ornamentation or even the social agenda associated with parts of modernism may be off-putting to some people, leading to public apathy toward saving these buildings. While these may be symptoms, we don’t believe these are at the core of the problem. But then Mr. Hylton brings up a point we can fully agree with: “a mistake that champions of modernism make in attempting to preserve the buildings of the 1950s and ‘60s is that often a building’s architectural significance is promoted above its social and cultural importance.”
END_OF_DOCUMENT_TOKEN_TO_BE_REPLACED 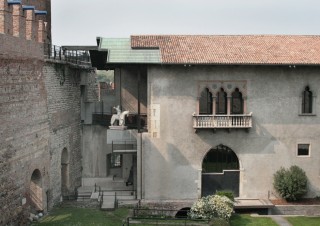 Castelvecchio is a storied medieval fortification in Verona, Italy with portions dating back to the 12th century. The majority was constructed in 1354 by the Lords of Verona for their residence and military compound. In 1797, Napoleon’s troops built a utilitarian barracks wing during their occupation and demolished other portions in retribution. Over the last 700 years, Castelvecchio has been marked by numerous military engagements, alterations, and events. In 1923 (during the reign of Mussolini and Italian fascism) it was transformed from its military function to a museum.
END_OF_DOCUMENT_TOKEN_TO_BE_REPLACED

Paul Rudolph’s famed Riverview High School in Sarasota, Florida has now been demolished to make room for a parking lot. The Sarasota Architectural Foundation (SAF) won a reprieve in 2008 from the School District to find a viable design and financial alternative that met the School District’s objectives and preserved this significant modernist work. While the competition yielded great ideas from well-known talent, it was not enough. Rudolph’s Riverview High School was demolished in June 2009 – images may be seen on the Save Riverview blog.
END_OF_DOCUMENT_TOKEN_TO_BE_REPLACED